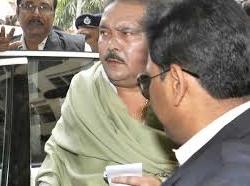 Rejecting his bail plea yet again, a court in Kolkata Friday extended till Jan 30 the judicial custody of West Bengal Transport Minister Madan Mitra, arrested in connection with the Saradha scam.

Mitra was presented in the court of additional chief judicial magistrate H. Mukherjee on the expiry of his earlier judicial remand.  After hearing both prosecution and the defence, the court extended his custody by 14 days. (IANS)

Workshop on ‘Right to Freedom of Expression’