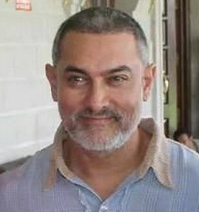 Bollywood superstar Aamir Khan will play the role of a middle-aged man in his upcoming movie ‘Dangal’, a movie based on Wrestling. Directed by Nitesh Tiwari, “Dangal” is based on the story of wrestler Mahavir Phogat, the father of Indian women wrestlers Geeta and Babita Kumari Phogat.

Aamir’s new look is making a buzz on social media as ‘salt and pepper look’. Aamir has cut his hair short and sports a beard. Aamir has already been working on building a bulkier physique for the role. ‘Dangal’ will revolve around educating parents and letting their daughters follow their dream.

Aamir Khan is known for sporting new looks for each movie. From ‘Mangal Pandey’ to ‘PK’ and ‘Dangal’, each look has a different style and message. Let’s see whether Aamir does justice to this new role or not.