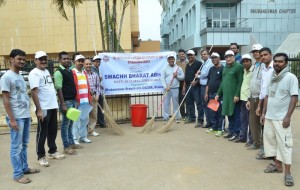 The Institute of Chartered Accountants of India (ICAI), which was nominated by Prime Minister Narendra Modi for the Swachh Bharat Abhiyan on December 25, 2014, has organised a cleanliness drive in Bhubaneswar at the ICAI Bhawan in Nayapalli. The Branch will conduct cleanliness drive at public places such as Railway station, Hospitals, Park, Bus stand etc in the city of Bhubaneswar and instal waste bins at important junctions across the city in coming months.