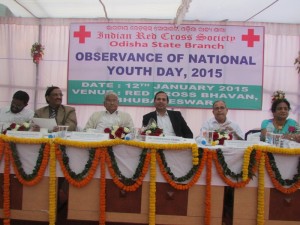 Indian Red Cross Society, Odisha State Branch celebrated National Youth Day on January 12 to commemorate the 152nd birth anniversary of Swami Vivekananda, maker of modern India. The main objective of the National Youth Day was to spread knowledge and message of Swami Vivekananda to the society, to build good characters and true citizens of the nation. Over 200 Youth Red Cross volunteers, Counsellors from 13 colleges of Bhubaneswar, SDRT member and life members of Red Cross have joined the occasion to celebrate this day.

Shri Sudhansu Bhusan Mishra, IAS (Retd.), former Chief Secretary, Govt. of Odisha and Chairman, Health & Care Standing Committee, IRCS-OSB inaugurated the state level function as the Chief Guest and said, “Vivekananda is known as the man behind starting the culture of modern India. He is one of the great Indian citizens who made the world believe that Indian culture has a great history.

Prof. Dr. Nihar Ranjan Patnaik, Director, Higher Education, Odisha joined as Guest of Honour and inspires all the youths towards the philosophy of Swami Vivekananda and his ideals. Shri Biswaranjan Satapathy, Secretary, Akhil Bharat Vivekananda Yuva Mahamandal, Odisha joined as Chief Speaker on the occasion and said, “We should create the awareness among the people in various aspects of Health, Education, Technology, and develop the quality of Spiritualism among the youth”. To mark the occasion, a blood donation camp was organised at Red Cross Bhavan, Bhubaneswar this morning. Dr. Panda inaugurated the camp. A human chain was organised in front of Red Cross Bhavan to create awareness about road safety. Cleaning of the premises of the office, was done as part of Swachh Bharat Abhiyan.

In addition, a debate competition on National Youth Day was organised and prizes were distributed to the YRC volunteers of NISWAS, KISS and Droupadi College of Bhubanewar, who secured 1st, 2nd and 3rd spot respectively. The programme was coordinated by Dr. Debadatta Satpathy, YRCO, IRCS-OSB and Vote of Thanks was given by Govinda Chandra Mahunta, Honorary Joint Secretary, IRCS-OSB.