Experts at SOA University on Wednesday advocated choice of a healthy lifestyle to keep away from cancer saying around one-third of all carcinomas could be prevented through diet and physical activity even as the University declared all its campuses tobacco-free zones.

The announcement, coinciding with the World Cancer Day, was made by the Vice-Chancellor Prof. Amit Banerjee, aiming at ensuring zero consumption of tobacco products within the university precincts. “No one is expected to consume tobacco products within the campuses and it will be voluntary till May 31, which is the World No Tobacco Day. After that penalty will be imposed,” Prof. Banerjee said while speaking at the Cancer Survivors’ Day event organized at the Institute of Medical Sciences and Sum Hospital, run by the University.

Prof. Banerjee said the University would also seek the assistance of the police, municipal and civic authorities to ensure that no tobacco products were sold within a radius of 100 metres from its campuses. Dr. Sunil Agrawala, surgical oncologist at the hospital, said India was the 2nd largest consumer of tobacco products. Detection of cancer at an advanced stage, economic deprivation of the victims and poor nutritional and immune status greatly hampered the treatment, he said. “It is a big challenge, but it is not beyond us to meet this challenge through early detection, treatment and care,” he said. Eminent danseus Ananda Shankar Jayant, an exponent of Bharatanatyam and Kuchipudi styles, who had been detected with breast cancer in 2008 and “danced through” her condition, said it was the affected person’s attitude which mattered the most.

“When my medical reports came, I was scared, I cried and I was angry. But then I resolved that cancer could only be one page of my life and I will not allow this page to impact my life,” Jayant, who was the chief guest at the event, told over 100 cancer survivors. “I literally danced through the two-year treatment schedule,” she said. 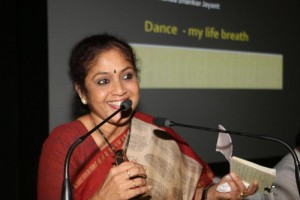 Eminent film maker Sushant Mani, guest of honour at the program, encouraged the cancer afflicted not to lose heart but realize that they had the inherent strength to battle this problem. Jayant, who was decorated with the Padma Shri for her contribution to classical dance in 2007, said as she was distraught her husband’s positive attitude greatly helped. “He stood by me as I went through surgery and chemotherapy.”

“Instead of ruing my lot, I informed all my friends that I had cancer and when I turned bald after chemo, I wore it like badge. I looked at my underlying strength, deep passion, classical dance, and continued with my dancing activities,” she said. Jayant said she also did not get depressed as to why she got struck by cancer. “It’s natural for people to ask ‘why me?’”, she said.

“I thought. When I never asked ‘Why me?’ When I got the Padma Shri, why should I now ask that question blaming God for it?” She said that such things do happen in life and come as speed-breakers. But no one should consider them as walls. “Whether you’ll chose cancer or your passion is your choice. It is in your hands,” Jayant said. “Somehow, we look at cancer as a monster. But we are not afraid of cardiac problem or diabetes. It’s not necessary to be afraid of cancer as well,” she said as the audience gave her a standing applause.

Dr. Soumya Surath Panda, medical oncologist at the hospital, said the tagline for the World Cancer Day this year was “Not Beyond Us”. Tackling cancer was no longer a task beyond our capabilities and the tagline was a positive and proactive approach to fight cancer. There was need to combat stigma and misconceptions around cancer with information and awareness, he said. Dean of IMS and Sum Hospital Prof. D.K.Roy, Medical Superintendent Dr. P.K.Mohanty and Dean of Institute of Dental Sciences, Dr. Neeta Mohanty addressed the gathering.