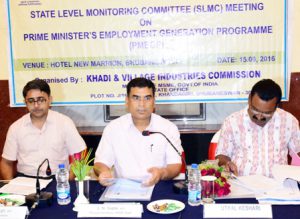 A State Level Monitoring Committee meeting-cum- workshop on Prime Minister’s Employment Generation Programme (PMEGP) was held by the State Office, KVIC, Odisha in collaboration with the Department of MSME, Govt. Of Odisha, The said workshop was presided over by Sri L.N.Gupta, IAS, Principal Secretary MSME, Govt. of Odisha.

Welcoming the guests, Sri Utkal Keshari, State Director, KVIC, Bhubaneswar shared the details of progress made under PMEGP during the year 2016-17. Sri L.N.Gupta, Principal Secretary, MSME Department, Govt. of Odisha reviewed the progress and achievement made under PMEGP in the year 2015-16 and 2016-17. In the year 2015-16, the target under Margin Money disbursement was Rs.62.82 Crore whereas Margin Money claims amounting to Rs.93.31 crores were received from various banks.

The banks were also requested to send the Margin Money claims on an immediate basis to KVIC, so that disbursement can be made at the earliest. To encourage the Scheduled Caste and Scheduled Tribe Category entrepreneurs to set up units on their own, applications have been invited only from SC and ST category during the current year 2016-17. Till date applications are received from 3918 SC & 1784 ST category beneficiaries.

Out of those applications of 1478 SC &amp; 545 ST applicants have been approved by DLTFC and forwarded to the banks for sanction. The bankers have been requested to process the said applications by October, so that training of beneficiaries and disbursement of 1 st instalment can take place by November, 2016. Mr. Gupta informed that during the current year there is a budget provision of Rs.57.00 crore for the scheme. In his address, Sri Balwant Singh, IAS, Director of Industries, Odisha discussed about the online system under PMEGP introduced from this year for the first time and also requested KVIC to solve the problems faced by the stake holders in implementation of the same.

The meeting was attended by 26 Bankers including the representatives of Lead Bank UCo Bank &amp; NABARD, Central/State Govt. officials and all the 31General Managers of RICs and DICs.