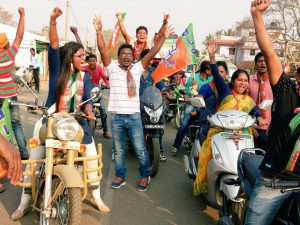 bha MP Ramachandra Hansda went to jail in chit fund scam, Sports Minister Sudam Marandi had shot to fame, thanks to the political vacuum in Mayurbhanj. However, his fort has started to crumble over the last 12 months. A young, energetic power woman, Chhabi Mahali, has not only challenged his leadership, but also made him bite the dust in the Zilla Parishad polls.

Chhabi, known as a leading social activist even at the age of 30, has been active in politics since 2013. She had contested the Lok Sabha polls on Aam Aadmi Party (AAP) ticket in 2014 polls with no success. But, she definitely sounded the bugle for future. Although she gave her heart and soul to AAP, she became disgruntled with the party at a later stage because of the lacklusture approach of the central as well as state leadership. She stopped the political activities and focused on her social service through Disha Foundation Trust.

It was Dharmendra Pradhan, who discovered the talent in Chhabi. She got a call from BJP through senior leader Samir Mohanty and there was no looking back after that. Chhabi’s first test after joining the BJP was Panchayat Polls 2017. Riding Hero Honda and later Bullet, she campaigned hard in rural tribal pockets and even held small road shows. Chhabi’s campaign style went well with the people. She did not require any central or state level leaders in her focus zones. osed full trust in their Chhabi Apa. And, she did not disappoint. She finally managed to break the citadel of Sudam Marandi in Bangiriposhi and sent a strong signal to everyone that she has finally entered the political arena with a big bang and will be here to stay for long. As a young, powerful and strong tribal woman leader, Chhabi has the charisma to woo the voters not only in her own area, but elsewhere in the state. This is just a beginning.

Chhabi’s hobbies include Bike Riding, Social Service, Reading and Meeting people. She has been passionate about working for poor and downtrodden since childhood. She always fights for justice and believes in retaliation instead of keeping quiet. As a woman, she did face many challenges in the past whether in modelling (in the past), politics or social service. But, she believes in ‘Never Say Die’ and move on with rejuvenated energy and passion. It would be interesting to see whether BJP and Dharmendra Pradhan acknowledge her potential and assign her with more responsibilities in future or not.