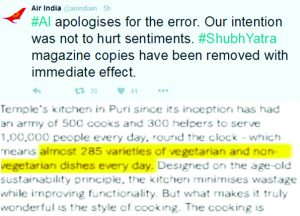 State-run Air India authorities on Saturday expressed their apologies for the false report published in-flight magazine Shubh Yatra, mentioning that non-vegetarian prasads are sold at the Ananda Bazaar of the Jagannath Temple in Puri.

In this connection, Air India tweeted that, “#AI apologises for the error. Our intention was not to hurt sentiments. #ShubhYatra magazine copies have been removed with immediate effect”.

AIR India also announced not to publish any articles by this author in future.

It may be noted that in the October edition, titled “Devotion can be delicious!” it had been written, “Said to be the largest in the country, the Jagannath’s Temple’s kitchen in Puri since its inception has had an army; of 500 cooks and 300 helpers to serve 1,00,000 people every day, round the clock- which means almost 285 variety of vegetarian and non-vegetarian dishes every day.”