All Not Well within Odisha BJP; KV Singhdeo still Sulks 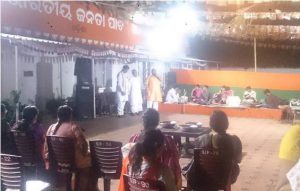 The Odisha BJP had organised a ‘Holi Milan’ meet up for the journalists and other key people at the party office on 23rd March. The meeting coincided with martyrdom day of Shaheed Bhagat Singh, Rajguru and Sukhdev. However, former state unit President KV Singhdeo has messed up things during the celebrations.

The meet up began with senior BJP leaders such as Basant Panda, KV Singhdeo, Biswabhushan Harichandan, Prithviraj Harichandan, Bhrigu Baxipatra and others paying floral tribute to the martyrs. Union Minister Jual Oram joined them later. A cultural program was held, which started with recital of Vande Mataram. Slogans such as Jai Hind and Bharat Mata Ki Jai filled their air.

Everything was going smooth until Odisha BJP President Basant Panda forced a reluctant KV Singhdeo to join the Holi celebrations. When some workers put colour on KV, he got enraged. He shouted at everyone and left the venue in a hurry. The senior BJP leaders tried to placate him, but in vain. The King did not relent.

As the incident occurred in full media glare, it sent a very wrong signal to the cadres as well as to the people. Being a senior leader, KV could have handled things in a better way instead of resorting to emotional outburst on a trivial issue. Well, it’s just expected that Odisha BJP would quell the resentment among its leaders and bring everyong on the same page sooner than later.