Barcelona will try and do better in 2016: Messi 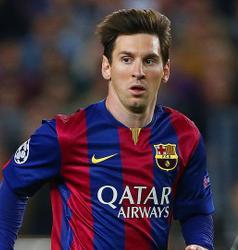 Barcelona, Dec 31: Barcelona forward Lionel Messi has said that they would try to improve on their stupendous performance in 2015 after scoring in his 500th appearance for the Catalan football giants in a 4-0 win against Real Betis in La Liga.

Messi scored the second of the night here on Wednesday after exchanging a few passes with Neymar.

Barcelona had displayed the five trophies they won in 2015 — the Champions League, La Liga, Copa del Rey, European Supercup and Club World Cup — before the game.

“It has been a spectacular year and we tried to end it in the same way. It would be difficult to improve on what we did in 2015, but we are going to try. We have a very motivated squad which wants to do important things,” Messi was quoted as saying by espnfc.com on Thursday.

Coach Luis Enrique too said he was thinking about winning more games and trophies in 2016.

“Now we must keep working that is the only thing which will guarantee that we can repeat something like we experienced this year. We have a team who enjoy themselves and play well,” Enrique said.

“2015 is now gone, I am not interested in it any more. Now we have to try and be the best again in 2016. The objective is to win again. There cannot be any other objective.”  (IANS)

Kohli to be honoured with Polly Umrigar Award