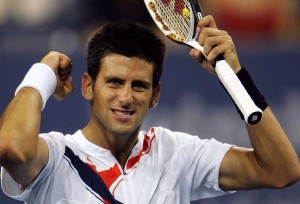 Paris, June 3 (IANS): World No.1 Novak Djokovic outclassed World No.7 Rafael Nadal 7-5, 6-3, 6-1 in the men’s singles quarter-finals match to book a place in the semi-finals of the French Open here on Wednesday.

World No.3 Andy Murray defeated World No.8 David Ferrer 7-6, 6-2, 5-7, 6-1 in the men’s singles quarter-finals to enter the semi-finals and set up the clash with Djokovic. Andy Murray became the first British player to reach three semi-finals at Roland Garros.

Djokovic was fighting to complete the career Grand Slam with a Roland Garros crown, while Nadal was looking to claim an unprecedented 10th trophy on the Parisian clay. But the win by the Serbian dashed all hopes of Nadal on Wednesday, as Djokovic registered his first victory over Nadal in seven encounters in Paris.

Djokovic got off to a roaring start on a beautiful Wednesday afternoon in Paris, capturing eight of the first nine points to snag an early break of serve.

The World No. 1 extended his lead with a second break for 4-0, but Nadal refused to let him run away with the set, grabbing a break back in the next game.

A sublime running backhand pass down the line at 30/30 gave the nine-time champ his first break point, which he converted.

Serving down 4-5, Nadal saved a first set point with a deep first serve and a second with a drop shot that caught Djokovic off guard. He’d stave off a third set point with another perfectly-timed drop shot after a gripping baseline exchange.

But the Serbian was too good as he went on to take the first set 7-5.

The winner of the first set has gone on to claim 11 of the last 13 meetings and Djokovic was looking to build on 77 percent first serve points won and 19 total winners.

Both players were cruising through their service games in the second set until the eighth game when the top seed used his agility to create favourable angles for his forehand and suddenly snatched a break for 5-3.

Djokovic was dominant on his own serve in the second set, claiming 16 of 18 straight service points, before eventually taking a two-set lead.

As the third set commenced, the top-ranked Serb flipped the switch to cruise control. A break of serve in the opening game gave him added momentum and a second break gave Djokovic a stranglehold on the set and the match. He grabbed a 4-0 lead when a forehand clipped the tape and dropped onto Nadal’s side of the court.

Nadal never looked into the game as Djokovic also took the third set in a one-sided clash 6-1.