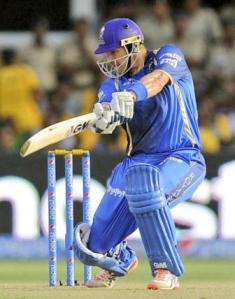 Chasing a 157-run target for victory, Royals didn’t blink even once with the experienced opening pair thrashing the hapless CSK bowlers, putting on a 144-run opening partnership, to stroll to the target with 10 balls to spare.

With the comfortable victory, Royals maintained their 100 percent win-record in the campaign, perched at the top of the standings with a maximum 10 points from five games. Chennai remained just a rung below Royals with six points from four matches.

Royals captain Watson recovered to play his first game of this year’s IPL after missing four matches with a hip injury.

And he looked in no discomfort whatsoever, carting the CSK bowlers all over the ground, hitting six boundaries and four sixes. Rahane was also in no mood to play the sheet anchor role as he was equally aggressive — six fours and two sixes — to give CSK a royal hiding.

Earlier, CSK captain Mahendra Singh Dhoni won the toss and chose to bat, with his team posting a fighting total of 156/4. Dhoni’s decision to bat first under sweltering conditions was believed to be correct but his hopes of a strong start were dampened soon.

Kiwi Dasher Brendon McCullum (12) was dismissed in the third over by Royals’ veteran spinner Pravin Tambe (1/36).

That was a big blow for CSK but to make matters worse, Indiam middle-order batsman Suresh Raina (4) perished soon, followed by South African Faf Du Plessis (1). But it was the wicket of West Indian opener Dwayne Smith (40), in the 10th over, that was the biggest setback for CSK.

Royals bowlers were disciplined and kept a tight leash on the CSK batsmen. The onus was on the fifth-wicket partnership of Dhoni (31 not out) and Dwayne Bravo (unbeaten 62) to lend some sense of respectability to the CSK innings.

The experienced duo were successful in their endeavour, putting up an unbeaten 91-run stand off 65 balls. They didn’t take any particular risk and played themselves in before launching into extravagant strokes in the last three overs.

Bravo was particularly impressive, hitting the formidable Royals attack to all corners of the ground to propel his team them to a competitive total. Royals’ South African pacer Chris Morris was the most impressive giving away a miserly nine runs off his four overs, and claiming Raina’s wicket. (IANS)