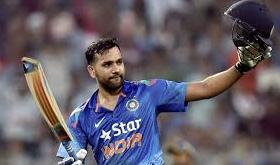 Opening batsman Rohit Sharma (138) notched his sixth hundred to lift India to 267 for eight against Australia in their first One-Day International (ODI) match of the tri-series in Melbourneat the Melbourne Cricket Ground (MCG) Sunday. Rohit hit nine fours and four sixes and strung together a crucial 126-run partnership for the fourth wicket with left-hander Suresh Raina (51).

India got off to a poor start, losing opener Shikhar Dhawan (2) in the first over. The left-hander offered a catch to Aaron Finch off the bowling of pacer Mitchell Starc. Right-hander Ajinkya Rahane (12) also lost his wicket cheaply, edging debutant Gurinder Sandhu’s delivery to wicketkeeper Brad Haddin. Starc made further inroads into the Indian batting line-up as vice-captain Virat Kohli (9) offered a catch to host skipper George Bailey which left the visitors reeling at 59 for three in 12.5 overs.

Then, Raina joined Rohit at the crease to stabilise the innings. Both the batsmen took time to settle down before improving the run rate. The 27-year-old Rohit started his calculated assault in the fourth over when he hit the ball over the head of pace bowler Pat Cummins and continued to collect boundaries regularly. He later hit two more sixes off Starc and Faulkner and got good support from Raina at the other end. Raina relied on singles and twos but didn’t hesitate to punish weak deliveries.

He scored his 33rd half century and their partnership flourished, providing a strong platform for the rest of the batsmen. After the 28-year-old Raina perished trying to clear the mid-on off a Starc delivery, the lower-middle order batsmen failed to get it going. Skipper Mahendra Singh Dhoni (19) lost his wicket after being bowled by Starc and later young all-rounder Axar Patel (0) failed to impress.

However, Rohit continued his assault and ensured that the visitors put up a challenging total. He also registered his third century against Australia. The 24-year-old Starc was the most successful bowler for Australia, taking six wickets for 43 in 10 overs while Sandhu and Faulkner picked up a wicket each.