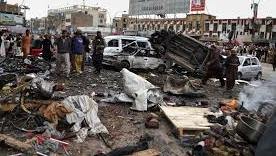 An official in the city said that the suicide bomber reached the site on a motorbike and exploded his jacket near the main gate of the religious centre. According to an eyewitness, the bomber arrived at 9.20 p.m. amid darkness caused by a power cut in the area.

ARY News reported that the injured people including two policemen were shifted to a nearby hospital and several of them were in critical condition. Rescue teams rushed to the blast site, while the authorities put two major hospitals in the city on high alert.

Police and security forces cordoned off the area for a search operation. No group has claimed responsibility for the attack yet. The attack was carried out soon after jail authorities in the city Friday, hanged a terrorist, convicted of being involved in the failed assassination attempt on former president Pervez Musharraf in 2003.

Local Shia group Azadari Council condemned the attack and announced a three-day mourning across the country. Pakistan Prime Minister Nawaz Sharif, reiterating his resolve to eliminate terrorism from the country, condemned the blast and has sought a report from the concerned authorities. (IANS)