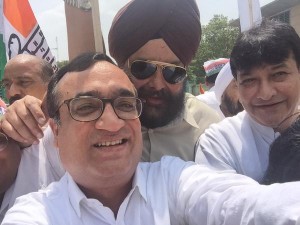 New Delhi, Sep 10: The Congress on Thursday accused the government of paying “lip service” to the problem of call drop and demanded that any call terminated without the will of the consumer should be categorised as “dropped call” and rebate should be provided to phone users in their bills.

“The helpless mobile phone consumer is being made to go through double torture of paying more and not getting the basic facility of conversing without his call getting disconnected,” Maken said here. He said that according to the Telecom Regulatory Authority of India, call drops have jumped two-fold on 2G networks and by 65 percent on 3G networks in the first half of 2015, compared to 2014.

He said Delhi, Mumbai and Kolkata were among cities which were most severely hit. The Congress leader said that as per TRAI norms, the call drop rate of any service provider should not exceed two percent but audit report findings say that dropped calls were as high as 17 percent in Delhi.

“The situation on ground is much worse. The Modi government, which has gained perfection in doing lip service, has asked TRAI to come out with a consultation paper on call drops,” he said. Maken also took exception to statements that mobile towers were safe and said the government should come up with a national tower policy which addresses concerns of people.

“Any call which is terminated without the will of the user should be categorised as a dropped call,” he said. “The Modi government should use powers under TRAI Act and issue directions to TRAI to impose mandatory compensation for all mobile users as per the percentage of call drops on their network,” he added. Maken alleged that cellular operators have “failed to invest in upgrading technology and infrastructure despite making windfall profits”.