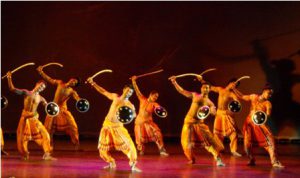 Among all the ancient dance forms, Chhau dance is popular everywhere as the one featuring the ancient marital skills. Going by its other name, “Paika Nurtya”, the dance vividly brings up the olden memories of rule by powerful rulers of Odisha- Ganga and Gajapati. The rulers had established their kingdom from the River Ganges of northern India to the Godavari in South. Literally, ‘Paika’ meaning infantry soldier, the dance form is reminiscent of the valiant soldiers, who fought relentlessly to set up the sovereignty of their chieftains.

As the ancient customs in the district of Mayurbhanj went, the ‘paikas’ were not on the regular payroll of the Army but had big grants from the kings in the forms of land. Known as peasant-militia, they held regular practice of war techniques. The village groups served under the command of group head known as Dalabehera.

As the traditions in Mayurbhanj district goes, “paika akhada” or village gymnasiums exist in every part. The local youths assemble in the evening to do traditional physical exercises and dance with sword to the accompaniment of music from drum. The dance form holds in its various poses and movements the delicate art of building physical excitement in the bodies of fighters that leads them to spirited fight in the battle.

As traditionally, ‘Dussehra’ is the occasion, when all the akhadas or village gymnasiums observe their annual festival. The villages in Mayurbhanj host the occasion by staging shows on gymnastics, acrobatics, and Chhau dance by various troupes. The participants win prizes as competitions take place at every place in the district.

As the interpretation by leading scholar and poet Sitakant Mahapatra goes, the word “Chau’ is a derivative from the word “Chhauani’ meaning a military camp. All the regional festivals in the district exclusively feature the dance form but the festival of spring or Chaitra Parva is famous for the non-stop staging of this dance form for 13 days, when the entire community takes part. Blending forms of dance and skills from martial art, the art engages various mock practices of war techniques. As the dance is performed by men from different families of traditional artists during night at open spaces, huge crowd gathers to watch its proceedings.

Unlike the other forms of this dance form existing in Seraikela of Jharkhand and Purulia district of West Bengal, the performers of Mayurbhanj Chance dance do not wear any mask. But bearing similarities in technicalities with Seraikela Chhau, Mayurbhanj Chhau has survived as one of the most prominent forms of folk art.