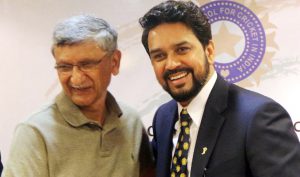 The Supreme Court of of India today ordered the removal of BCCI President Anurag Thakur and Secretary Ajay Shirke from their posts.

Meantime, Supreme Court appointed Fali Nariman & senior SC lawyer Gopal Subramanium as Amicus Curiae to find out who would be the BCCI officials.

The Lodha Committee has suggested sweeping reforms according to which an office bearer would be disqualified if he/she was not a citizen of India, was 70 years or older, had been an office bearer of the BCCI for a period of nine years, was a minister or a government servant, held post in any other sports association.