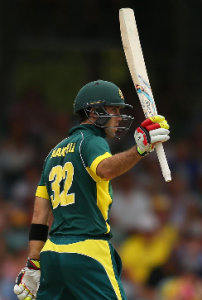 Hosts Australia gave a warning to other cricketing nations ahead of the World Cup at home with a comprehensive 112-run drubbing of England in the final to lift the tri-series trophy at the WACA here Sunday.

Australia dominated the match as they did in the entire series, winning all their matches, to make themselves favourites for the mega quadrennial event which gets underway Feb 14 in Australia and New Zealand.

An all-round performance by man-of-the-match Glenn Maxwell helped Australia post a strong total of 278/8 and then bowl out England for a mere 166 runs in only 39.1 overs. The day totally belonged to Maxwell as the 26-year-old all-rounder not just notched up his highest One-Day International (ODI) score of 95, but also clinched his best bowling figures of 4/46.

It was at this point when Maxwell struck a significant 141-run fifth-wicket partnership with Mitchell Marsh (60), taking the hosts past the 200-run mark. The combine helped Australia recover from a poor start.

However, Maxwell fell five short of his maiden hundred and his wicket was followed by that of Marsh’s. Wicketkeeper-batsman Brad Haddin (9) also fell in a span of 11 deliveries, making Australia panic once more at 224/7 in the 45th over.

However, a blitzkrieg unbeaten half-century by James Faulkner (50 not out), off just 24 balls which included four fours and sixes each, took the four-time World Champions to a challenging total. England pacer James Anderson was lethal with the new ball and ended with figures of 2/38 from his 10 overs while Stuart Broad picked up 3/55 from his 10.

In reply, the England innings never took off as the batsmen kept getting out at regular intervals right from the start. Middle-order batsman Ravi Bopara was the top scorer of his team with 33 while opener Moeen Ali scored 26.

Maxwell was the highest wicket-taker while lethal fast bowler Mitchell Johnson, returning from an injury break, was right on target with 3/27 from his seven overs which was studded with two maidens. New ball bowler Josh Hazlewood (2/13) clean bowled Steven Finn (6) to wrap up the England innings.